On Becoming a Bat Mitzvah: An(other) Open Letter to my Daughter

{On October 31, 2015, my older daughter became a Bat Mitzvah in a beautiful and moving service that she led. It was 1 year and 10 months after the open letter I published here, hoping to convey to her why this rite of passage was so important to me. Below are the words I spoke to her after her own wonderful speech,}

Well, Becky, I thought this day might never come.

No surprise, you did a beautiful job leading us in your Bat Mitzvah service. After all the wrestling it took to get here… well, I am so proud to be your mother. And maybe it’s worth a few words about why. You are radiantly intelligent. And you’re beautiful. And you just read the Torah in Hebrew, and there weren’t even any vowels. You’re gifted and blessed in so many ways.

But those aren’t the things that make me so proud. Those are the things you were born with, your genetic inheritance, what some would call God’s gifts to you. You got those gifts without any effort or intention.

No, what makes me swell with pride is the long, windy struggle that brought you here. You questioned and challenged and kicked – and at the end of that path, you made a choice.  You chose to respect my wishes, even though you found them inaccessible. You chose to approach your practice with determination, even though it ate into your leisure time. And you chose to trust me- even though you did look back over your shoulder from time to time along the way.

And unlike God in your Torah portion, I knew that your struggle was a good sign; it showed me that you’re not going to just do what people tell you to do without questioning whether it’s right for you. Nothing could make me feel better about your entry into adolescence. I may have lost my temper a time or two along this bumpy path, but never once did I want to turn you into salt.

You’re familiar with Facing History and Ourselves, a non-profit whose motto is “People make choices, and choices make history.” Today, I want you to remember this above all: in the words of philosopher Jean Paul Sartre, we are our choices. Life is what you make of your gifts. You can use your creativity and your mastery of the written word to fight injustice. Or you can write it all off as hopeless. The choice is yours.

My hope is that your Jewish identity will provide a moral compass when you face down those decisions that will chart your course. In your next 13 years, as you become more independent in your choices, as you become a voter and a professional and maybe even a parent - may you always return to the basics. Do justly. Love mercy. Walk humbly.

And here we are: you, recognizing that you have so much left to learn, and me, knowing that I have to unravel some of my own hard wiring to be the mother I want to be.

This is the most rewarding part of being your mom: I’m still growing, still being challenged, still learning and unlearning.

May you always have an appetite for things that challenge you. The rewards are so great.

Posted by Unknown at 9:11 AM No comments:

To those who would condemn my marriage

In June, I got married. I walked down the aisle holding a ukelele instead of a bouquet, serenading my betrothed with a shaky rendition of Marry Me. We stood under a trellis of ranunculus and gerbera daisies, our daughters and sisters at our sides, while a longtime friend officiated a moving ceremony.  Friends and family waved bubble wands, alternating between laughter and tears. We danced and ate and hugged and kissed and celebrated the first day of the rest of our life. As we closed in on our fifth year together, we told the world that we finally got it all right.

No one cared that they were celebrating the marriage of two women. All our guests could see was a love they would wish for anyone.

No gifts, we said – we already have too much stuff. But two weeks after our ceremony, on the Friday before SF Pride weekend, the Supreme Court gave us an unexpected wedding present: in a 5-4 decision, they held that the fundamental right to marry is guaranteed to same-sex couples. Our marriage, so far in our minds from being a political statement, was unwittingly happening at an historic time.

Around the country and across social media, proponents of LGBT equality burst into celebration. The Pride parades were never so joyous or emotional. Corporate America, from AirBnB to Procter and Gamble, had a gay old time with clever creatives affirming support for the SCOTUS decision. Twitter was atwitter with colorful tweets: a rainbow of Coca Cola bottles, even a pair of Maytag Men captioned "Perfect Together". It seemed that everyone was shouting "love wins" from their rooftops, unafraid.

I was in London, awake at 3AM, scrolling through an article featuring 35 of these celebratory tweets. Already emotional from jetlag, I was working my way through a box of tissues, puffy-eyed. Then I clicked through on one of them, the Maytag ad.

Among the enthusiastic retweets and shout-outs of gratitude, there were tendrils of disgust, fear and loathing. "@TheMaytagMan promoting the destruction of American values." "Will NEVER buy another Maytag product again after supporting the anti American decision by SCOTUS." "Keep the Maytag Man away from your children."

One the one hand, it was comical. You people know nothing about marketing, I thought to myself. These companies weren't being particularly bold. If Coca Cola or Delta Airlines had any market data to suggest their brand would be tarnished by their support for SCOTUS, those tweets would never have hit air. You're an insignificant blip, I silently mouthed to my would-be haters. But I was rattled. Living in our California bubble, we're surrounded by a community that has gotten used to, if not fully embraced, marriage as the expected fruition of love and commitment between two people, regardless of gender. I wasn't used to this.

If you really knew me...  I thought to myself. Yes, you, lady boycotting Maytag, I am talking to you. If you knew me, would you feel the same way? Because here's the thing. I bet we have a lot in common, starting with the fact that we both believe in getting married. 40% of Americans don't. You and I agree that the word wife communicates a commitment and responsibility that transcends girlfriend, lover, or partner. We share an affinity for commitment and dedication. We believe it's still meaningful.

And I'm guessing, if you've been in a relationship for a while too, we both understand what it means to be there for better or for worse. If what you picture when you hear about two women getting married is a nonstop lesbian porn reel, here are a few screen grabs from the past five years for you: in the emergency room with an infected kidney stone. Two months later, same ER, same kidney. A funeral for my stepdaughter's dad, age 50. Me lying in a Percocet-induced daze on the couch, reeling from a herniated disk, unable to reach my shoes to tie them. In the recovery room after a ovarian cystectomy. The two of us trying to calm my sobbing mother-in-law, lost in a fog of dementia. Oh, here's a good one: Paula and her daughter staring at their former apartment, burned down to the studs by a negligent contractor. (Lots of straight people lost their apartments in that fire too.) There was a silver lining, though. It gave us the nudge we needed to merge our households.

My wife shores up the parts of me that are weak. She reminds me that beauty is all around us, just waiting to be noticed. She calms my hamster-wheel of a brain. When I married her, I shared these vows:

In this world, it has become a Hallmark euphemism to say that someone has a beautiful heart.  But there is no other way to describe the way you show up in the world.  You don’t blog about it, you don’t post it on Facebook, it’s not a “possibility” for you… you are your beautiful heart.  It manifests in the unceremonious selflessness with which you give your energy to anyone who needs it, whether it is our family and friends or someone you’ve never met before.  It manifests through your hands, in the art you bring into the world.  You never ask for appreciation or reciprocation; giving comes naturally to you.  And in just being you, you show me what is possible for myself.  You make me want to be a better person, and yet I know that I can be your partner for life exactly as I am.  You have no intentions for me.  Our contract has no terms and conditions.  I feel perfect in your arms and in your life.

On this day, I commit to love you with a full heart exactly as you are, adding nothing and leaving nothing out. I commit to a life with you that is joyous, generous, and ultimately leaves the world a better place than we found it.  I commit to our amazing modern family and to having as many cats as you want.  I commit to you that when times are tough, and life throws us a curve ball, love will see us through – and that what doesn’t kill us will make us stronger.   I commit to our life together as a celebration, as a prayer of gratitude, and as a really, really fun game.

I love you, always and forever.

We did not decide to get married lightly. I was married before, to a man; I wasn't sure I wanted to make that commitment again. But in our fifth year together, when I could not look into the future and see any version of it that did not include her by my side, when I came to a place of full appreciation for the compassion and joy that she brings to my life, I agreed: I was already playing her wife on TV. Why not make it official, for the same reasons most other couples do: companionship, support, someone to share the joy and the pain? Isn't that why you got married?

Look, I get it. It takes some getting used to. I mean, I'm married to a woman, and still, when I hear another woman talking about her wife, I do a mental double-take: did she just say wife? It's still a curiosity, an oddity. But it's a beautiful one. Our marriage benefits the world in the same ways a straight marriage does: together, we are more resilient, we are stronger, we have more to give. And I promise you, if you knew us, you'd understand how solid our love is, how worthy of honor and recognition.

You seem like someone who will fight for what you believe in; that's another thing we have in common. So perhaps you could take that fierce spirit and use it for something we can all believe in: boycott the corporations polluting our waterways, or rally to take better care of the working poor, or the homeless, or the mentally ill.


It is, I firmly believe, what Jesus would do. 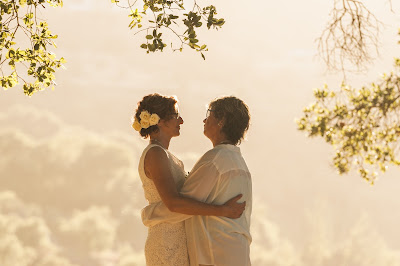